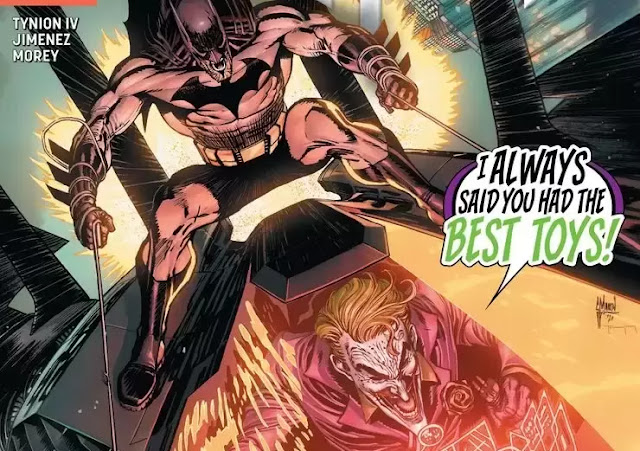 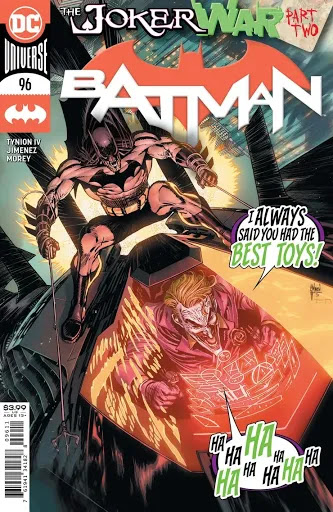 *Non Spoilers and Score At The Bottom*

The previous storyline led us into this new Joker War story arc and unfortunately, since then we’ve been stuck in set up, and it feels very needless. I watched what happened in this book, I don’t need to be reminded of how bad things are. I KNOW HOW BAD THINGS ARE! I was there! I read it! Writers like to add more weight to stories like this by accentuating how dire things are in the city, but when we have watched it happen, it is simply boring. However, at the end of the previous issue, Batman was attacked by the Batwing while he was infiltrating Wayne Industries. This is where we left off in the previous issue and I’m interested to see where it leads us. So, let’s jump into the previous issue and see where it takes us.

Our issue begins with a scene of Gotham many years from now. It has transformed into a very futuristic looking city and we see some chatter which we can assume is from Batman chasing someone down. A young child suddenly gets a message on his phone that tells him to step back and by doing so he is able to avoid being hit by an ongoing chase between Batman and Mr. Freeze. Freeze pulls his van over and steps out with two small boys who claim to be the sons of Mr. Freeze. The group chats for a moment before they are face to face with Batman and they shoot to freeze him. The Batcycle uses heating technology to free Batman from the ice and he goes on the offensive. Batman is able to easily incapacitate the young boys before taking down Freeze himself. Bruce returns to the cave where he is met with Alfred. They check in with each other which allows us to know that all the members of the Bat-Family are alive and well but as Bruce is leaving the cave, Alfred speaks strangely. His neck snaps and his face changes to a Joker smile as Batman suddenly wakes from his dream.

Batman wakes in a torn down apartment to find none other than Harley Quinn there with him. She reveals that she was able to survive the attack from Punchline. She tells him that he’s been out for the past 3 days and that he still has the new Joker toxin flowing through his body, though he’s past the worst of it. However, Gotham on the other hand is struggling more than ever. Joker is using Bruce’s money to outfit his gang with all types of new toys. This has also brought most members of other gangs to join up, making their numbers much higher. Plenty of civilians have begun taking things into their own hands because the police have been unable to do anything. Harley tries to do a quick examination of Batman but he demands to know what’s going on with the Joker. She reveals that Punchline is making more of the Joker Toxin that she used on him and that the Underbroker is using his lawyers to tie up the GCPD and force them to stay on the sidelines. She then shows him a video that the Joker has posted that invites everyone to the movie theaters to watch The Mask of Zorro. Batman begins to hallucinate again as he sees his parents die and then their faces contort to Joker smiles.

Batman suddenly hears Alfred’s voice in his head and Harley tries to inject him with a tranquilizer but he stops her and flees the apartment. He makes his way through Gotham and stops a few Joker goons on his way but he knows where Joker will be: The Monarch Theater. He makes his way there, all the while having Alfred’s voice in his head. He knows it isn’t real, but the hallucination isn’t stopping. Batman walks into the theater and finds it almost completely recreated from the time he was a child. He isn’t sure if it’s the toxin or Joker’s money that has made it happen but he moves forward anyway until he reaches the theater room. Inside he is greeted with a horrid stench. Inside he finds tons of bodies with Joker smiles but none of them are alive. Joker then appears on the screen and reveals that he has dug up every one of his victims and placed them inside of this theater and he has used The Designer’s gas to reanimate them. He is about to unleash them on to Gotham City. The bodies begin to move and turn toward Batman. This is where the issue leaves us.

So, I’m incredibly torn on this issue.

On the one hand, pretty much all of the same issues that have been plaguing this book remain here. A cliffhanger that goes nowhere, exposition upon exposition, reiterating that Gotham is in bad shape even though I know that already. These are all things I know and that this issue continues to hammer home. That said, I enjoyed the hallucination at the beginning a lot! I enjoy Batman’s interaction with Harley and I even enjoy Batman going forward with an Alfred hallucination in his mind. So even though I’m frustrated that I have once again finished a Batman issue and am once again finding myself in the exact same place I was previously, I enjoyed myself. That’s really the problem. I’m frustrated, but I liked reading this book.

I give this book a lot of credit this time around because I found myself enjoying it from almost start to finish. That being said, from a critical standpoint, I have to look at this book and say that almost everything they did in it was of no consequence and pretty much left me exactly where I was when we started this issue. So many things that I dislike are in this book and yet, I had fun. That’s kind of the point of reading it, isn’t it? Maybe I’ve become punch drunk. Maybe this book has beaten me so badly that I feel bliss. However, I have to be honest, it was fun.

I am the owner of the website thefartiste.com, my purpose is to bring all the most useful information to users.
Previous DC Comics (Creator) – TV Tropes
Next Why Superman’s Black Suit in ‘Zack Snyder’s Justice League’ Is Important

Kanye West is letting it be known that his beef with actor Pete Davidson has... END_OF_DOCUMENT_TOKEN_TO_BE_REPLACED

In April 2021, the Marvel Disney+ series The Falcon and the Winter Soldier came to... END_OF_DOCUMENT_TOKEN_TO_BE_REPLACED