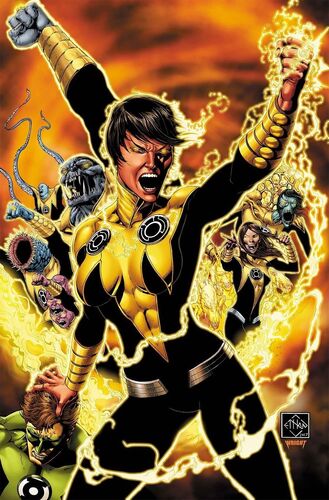 Former leader of the Sinestro Corps

Soranik Natu is the former Green Lantern of Sector 1417. She finally joined the corps of her father, Sinestro.

Expand
This section of the article does not provide a accomplished profile of the subject. You can help out by providing extra information, expanding on the subject matter in regulate to bring this article to a higher standard of timbre.
This template will categorize articles that include it into Category:Incomplete Articles.

Soranik was taken prisoner by the Sinestro Corps under the leadership of Arkillo. Upon Sinestro ‘s return to the Yellow Lantern Corps, he released Soranik from custody and installed her as the Green Lantern Ambassador to the Sinestro Corps.

merely before the loss of the Green Lantern Corps, Soranik is stripped of her park Lantern ring by Sinestro and is reluctantly made a jaundiced Lantern. She finally becomes the leader of the Sinestro Corps after her forefather is injured during the crusade on land with the Paling, and leads the Sinestro Corps to become protectors of the population during her tenure .

Main article: DC Rebirth
As the leader of the Sinestro Corps, Soranik forged an alliance and partnership with the fleeceable Lantern Corps. however, that alliance fell apart after the death of Sarko, a villain from the future who had been defeated by the two Corps was in fact her future son with Kyle Rayner – and that Kyle had kept Sarko ‘s kinship from her upon discovering it himself. As a solution, Soranik broke the alliance and left Mogo, proclaiming herself “ Soranik Sinestro ”. Her rebellion fell apart when John revealed he sabotaged their power battery to be unaccented to green lantern energy. [ 1 ]

I am the owner of the website thefartiste.com, my purpose is to bring all the most useful information to users.
Previous DNA leads to arrest of Texas man in 1996 rape, murder of California teen found in ravine
Next Kaldur’ahm (Earth-16)

Fathers are kind. Fathers protect you. Fathers raise you. I was protected by the monks... END_OF_DOCUMENT_TOKEN_TO_BE_REPLACED

Oops ! … I Did It Again Written By: Si Spurrier Art By: Aaron Lopresti,... END_OF_DOCUMENT_TOKEN_TO_BE_REPLACED